Potty Training Your Bird In 72 Hours

We can assume ... that birds have a conscious and subconscious awareness of where they defecate. By observing the innate behaviors exhibited by parrots in the wild, we can understand their needs and modify their behavior to allow them to fit into their domestic home.

Parrots in the wild develop a habit of defecating in certain areas and under certain conditions as a matter of survival. We know most breeding hens will sit on eggs all night long without leaving the nest and defecating. We know parrots that are territorial during their breeding cycle, tend to defecate at the perimeter of their territory, and know that most pet parrots do not defecate at night. This is why we usually see a great big poop in the morning. We can assume, from this information, that birds have a conscious and subconscious awareness of where they defecate. By observing the innate behaviors exhibited by parrots in the wild, we can understand their needs and modify their behavior to allow them to fit into their domestic home.

A parrot that is not potty trained will not make a good pet on a long-term basis. Anyone who owns a parrot is delinquent if they have not taken the few hours necessary to educate their pet, and no tame parrot is too old to learn.

There are only three easy steps:

1.Pay attention. The age and feeding habits of your pet will determine when it will need to have a bowel movement. Babies consuming formula will defecate as often as every 20 minutes around the clock. Older birds will vary from 30 minutes, to as long as eight or more hours. Watch your pet for a while and determine the frequency of bowel movements. Take into account the time of day and if your bird has eaten recently.

2.Leave your pet in the cage or on a perch and watch for a bowel movement. When this occurs, you should give a verbal praise and immediately remove the bird from the cage or perch, which is usually the greatest reward you can give a bird. This praise should be in the form of a word, which you will use to command the pet to defecate when you need him to. At HARTMAN AVIARY we say “Good Potty”. At this early stage, your pet will have no idea what you are trying to do. Be patient and your efforts will soon reap great rewards. Since you now have an idea of how long it will be before the next bowel movement, you can prevent an accident by putting the bird back into the cage or on the perch when one half of the expected time has passed.

3.Now you will wait for your pet to go potty and repeat step 2. If you follow this method on a consistent basis, within 72 hours some birds will be trying to go potty every time he sees you enter the room. (Because he wants to get out of the cage.) Soon he may be trying to go again even if he has nothing to pass. Once the bird has a grasp on the concept, you may start using this command to encourage your pet to defecate on command under most any circumstance.

This training, so far, will not teach your pet to have the bowel control. He will not know to wait until you give the potty command. It will only teach him to go on command. Once your pet understands you want him to go potty on command you can begin working on teaching the concept of holding it until appropriate.

This bowel control behavior will take much longer to teach. When you notice your bird squatting and lifting his tail to defecate, say “No”, and if possible, try to hold his tail down to stop the process. Now move him to an appropriate location and give the potty command. Stay with him until he goes, then praise and reward him when he finally does. If he has already defecated, do nothing. Just clean it up and plan to be ready the next time.

It is important not to startle the bird when trying to change this behavior. He is not intending to make a mistake. By positively encouraging appropriate behavior, he will not need the old behavior.

For a young bird, just like a human, bowel control may not be available until your baby is a year old or more. When an accident does occur and you did not catch it as it happened, do not reprimand him. In as little as a few seconds after defecation, your pet will probably be thinking about something else. If he is now thinking about how nice it would be to snuggle up to your neck and you tell him no, or punish him, he will be confused.

The most important concept for you to understand: when your pet poops on the couch or on your friend, you MADE your pet do it! By not teaching a parrot when and where it is appropriate to defecate, you are teaching him that it is acceptable to go anywhere.

Beware; there are a few ignorant people who will tell you that potty training your parrot is a bad idea because he may hold it until he dies. This has never happened. The behavior of learning bowel control is a natural process that many animals, including parrots, humans and dogs, practice normally under wild circumstances.

Now go check out this article about why bird toys are important!

By Steve Hartman/ The Parrot University 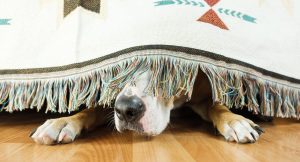 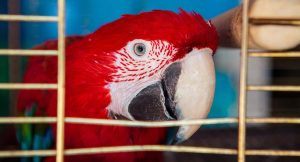